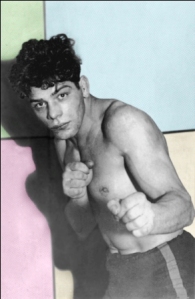 While German Chancellor Angela Merkel opened a permanent memorial to the half-million Roma and Sinti victims of the Nazi Holocaust today in Berlin’s Tiergarten Park, a temporary monument commemorating one single victim of the tragedy, Johann ‘Rukeli’ Trollmann (d. 1944), is also touring Germany.

‘A place for people to meet and communicate’. That’s how artist, Alekos Hofstetter, describes 9841, a sculpture memorializing Trollman, a Sinti-German boxer, which can be seen in Dresden until 24 December 2012. Trollman, who did his talking in the boxing ring, lost his life in the Nazi concentration camp of Wittenberge, where he was known as prisoner 9841.

Public art and physical commemorations have the power to sanctify the historical past while bringing people together in needful dialogue.  They serve as meeting places for communication, encounters for intercultural discourse, spaces for historical reflection, and venues for reconciliation. In offering a place for people to meet and communicate, the past is shared and the future is shaped.

And, a really clever monument lets you physically engage the context, or, in this case, literally enter the ring 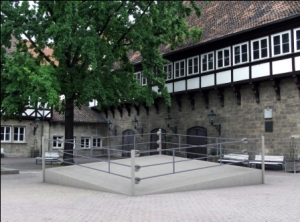 Sculpture 9841, by the artist group Bewegnung Nurr, is an installation consisting of a steel boxing ring with a sloping concrete surface. A dozen concrete boxing gloves cling to the ropes. The memorial translates the social and political threat which dominated Trollmann’s life into a life-sized three dimensional object. According to the artist statement, ‘the sloping surface of the boxing ring can no longer guarantee any foothold, just as the brutal defamation of “non-Aryan” persons in the Third Reich gradually pulled Trollmann into the abyss of loss of rights and persecution.  He lost not only his legitimate claim to the sports title of German Champion in Cruiserweight, but also – along with many other “non-Aryan” athletes – his life’.

Born on 27 December 1907 near Hannover, Trollmann rose to prominence in German boxing circles in the 1920s. Known for his dancing style, Trollmann was a forerunner of modern boxing in the style latter adopted by Muhammad Ali. Denied a place on the 1928 German Olympic team due to his race, the peak of Trollmann’s career took place on 9 June 1933 when he fought Adolf Witt for the German light-heavyweight title. Although he clearly beat Witt on points, Nazi officials, who could not afford a victorious non-Aryan to challenge their propagandistic theories of Aryan supremacy,  intervened resulting in the fight being judged a ‘no result’. Although the public outcry led the Nazis to temporarily acknowledge Trollmann as the victor, he was stripped of the result a week later.

A new fight, this time with Gustav Elder, was scheduled for 21 July, but Trollman was warned that if he ‘danced like a gypsy’, he would be stripped of his title. Trollmann, who came to the fight with his hair dyed blond and his skin powdered white, stood in the ring for five rounds before collapsing. He career as a professional boxer was over.

Beginning in 1939, Trollman was conscripted in the German Armed Forces, serving in Poland, Belgium and France, before being discharged in 1942 for ‘racial reasons’. In June of the same year, he was arrested in Hannover and deported to Neuengamme, where he was forced to train against SS men every evening. His fellow prisoners, upon faking his death, arranged for him to be transferred to Wittenberge. There, his identity was once again recognized, and he was forced to fight Emil Cornelius, a camp overseer. Trollmann defeated Cornelius, and in revenge, Cornelius murdered Trollman soon afterwards.

In 1982, Germany officially recognized the genocide of the Roma and Sinti.

In 2004, Johann ‘Rukeli’ Trollman was re-awarded the title of German Light-Heavyweight Champion by the Association of German Boxers. 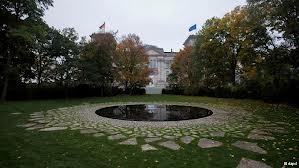 At today’s unveiling of Berlin’s memorial to the Roma and Sinti Holocaust, Chancellor Merkel paid tribute to the victims. ‘Every single fate in this genocide is a suffering beyond understanding. Every single fate fills me with sorrow and shame,’ she said.

The memorial, which is a water basin containing a stone on which a fresh flower will be placed each day, was designed by Israeli artist Dani Karavan, who desired the monument to be a symbol of life, sadness and memory, and for the space to be a place for meditation. ‘I wanted to reduce it to a minimum, not to make a big cry, but a silent whisper of pain.’

Still today, the Romani people are discriminated against in many European countries. According to Berlin’s Der Tagesspiegel, while the memorial ‘finally recognises the Nazi genocide of Europe’s Sinti and Roma… it certainly does not show future generations of Sinti and Roma a way out of the dilemma between exclusion, separation and assimilation’.

Maybe that’s too much to ask of a water basin and a concrete boxing ring, which, after all, provide little more than places to meet and communicate. Or, maybe it’s just a reminder that sharing the past is only as valuable as the future it helps to shape.

2 Responses to Sculpture 9841: Johann Trollmann and the Sinti Holocaust